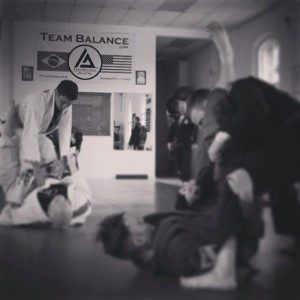 Gracie Brazilian Jiu Jitsu is a martial art and self defence system. It places emphasis on take-downs, throws, joint locks, chokes and other submission holds to control a situation.

The Gracies developed techniques that are efficient and work well for everyone regardless of size or strength. BJJ centers on simple, easy to learn techniques that allow you to defeat larger opponents in real situations.

The art offers something for everyone; men, women and children can enjoy the benefits of the simple and effective techniques as a method self defence, to keep fit and as a combat sport.

At Balance we offer 4 week courses for absolute beginners. Have a look at our ‘New to Balance‘ page for information on upcoming courses.

We also have gi and no gi classes for those with more experience. Just drop us and email and we’ll get you back on the mat. Here’s some information on the membership options available at Balance.

The Migliarese Brothers are the founders of Balance Studios. They have been involved in the arts of Gracie Jiu-Jitsu, Muay Thai and Boxing for over 30 years. Both are considered “extended family” of the Gracie’s and expert instructors/coaches.

We know that the words “world renowned” and “world class instruction” get thrown around a lot in the martial arts community, but these brothers are the real thing.

Helio Gracie is the founder the art of Gracie Jiu-Jitsu (GJJ), also known internationally as Brazilian Jiu-Jitsu (BJJ). Until his death, Hélio was the only living 10th degree master of the discipline. He is widely considered as one of the first sports heroes in Brazilian history. He was named Black Belt Magazine’s Man of the Year in 1997. Helio was the father of the world-renowned fighters Rickson Gracie, Royler Gracie, Royce Gracie, Relson Gracie and Ultimate Fighting Championship (UFC) founder Rorion Gracie.

Helio soon realised that due to his frail physique, most of the techniques he had learned from watching Carlos teach were particularly difficult for him to execute. Eager to make the techniques work for him, he began modifying them to accommodate his weak body. Emphasising the use of leverage and timing over strength and speed. Helio modified virtually all of the techniques and, through trial and error, created Gracie/Brazilian Jiu-jitsu.

In order to prove the effectiveness of his new system, Helio openly challenged all the reputable martial artists in Brazil. He fought 18 times, including matches against onetime world heavyweight wrestling champion, Wladek Zbyszko. He also fought the #2-ranked Judoka in the world at the time, Kato, whom Helio choked unconscious in six minutes. His victory against Kato qualified him to enter the ring with the world champion, Masahiko Kimura, who outweighed Helio by almost 80 pounds.

A modern-day legend, Helio Gracie gained international acclaim for his dedication to the dissemination of the art and philosophy of Gracie Jiu-jitsu. A dedicated family man who exemplified a healthy life-style, he was the epitome of courage, discipline, determination, and an inspiration to all those who knew him.